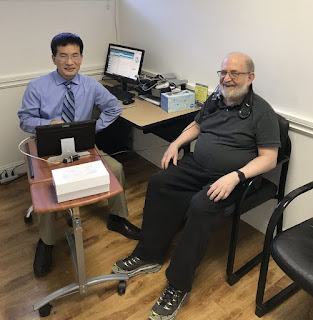 The device implanted below my right collarbone communicates wirelessly with the programmer. There are eight contacts one after another on the end of the electrodes skewering my Globus Pallidus Interna on each side, different parts of which are connected to different parts of the brain, controlling movement of my legs and feet and hands and other parts. Each electrode can emit pulses at a given frequency (up to 179 hz) for a periodic burst (I think, the "pulse width") and a given voltage or amperage. Pulses can be monopolar or bipolar  (not sure, but I'm guessing either negative only or negative and positive). The bipolar signals have a narrower effect; the monopolar signals are stronger.
There's no exact map of which parts of the GPi connect to which function of the brain. I think the theory is that the pulses disrupt the beta-rhythms which synchronize the brain function.  Anyway, the Boston Scientific device I have is new, giving the programmer lots of options not possible before.
- April 26, 2018 No comments: