In the late 80s, we saw the fall of AI and Expert Systems as a "hot" technology -- the "AI winter".  The methodology, in brief: build a representation system (a way of talking about facts about the world) and an inference engine (a way of making logical inferences bet of a set of facts).  Get experts to tell you facts about the world. Grind the inference engine, and get new facts. Voila!

I always felt that the problem with the methodology was the failure of model theory to scale: the more people and time involved in developing the "facts" about the world, the more likely it is that the terminology in the representation system would fuzz -- that different people involved in entering and maintaining the "knowledge base" would disagree about what the terms in the representation system stood for.

The "semantic web" chose to use URIs as the terminology for grounding abstract assertions and creating a model where those assertions were presumed to be about the real world.

This exacerbates the scalability problem. URIs are intrinsically ambiguous and were not designed to be precise denotation terms. The semantic web terminology of "definition" and "assignment" of URIs reflects a point of view I fundamentally disagree with.  URIs don't "denote". People may use them to denote, but it is a communication act; the fact that I say by "http://larry.masinter.net" I mean *me* does not imbue that URI with any intrinsic semantics.

I've been trying to get at these issues around ambiguity with the "duri" and "tdb" URI schemes, for example, but I think the fundamental perspective still simmers.
- August 15, 2011 3 comments:

Internet Privacy: TELLING a friend may mean telling THE ENEMY 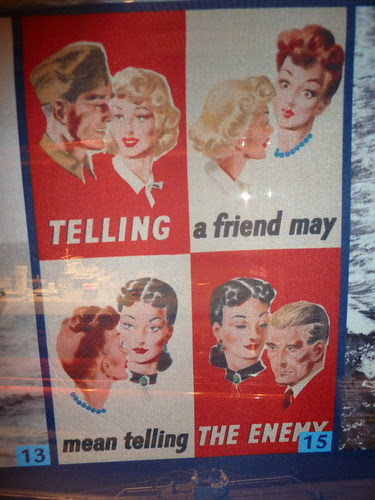 In the Quebec maritime museum, a photo by Lar4ry on Flickr.

After the recent IETF in Quebec, I found htis poster in a maritime museum.

The problem with most of the Internet privacy initiatives is that they don't seem to start with a threat analysis: who are your friends (those with web sites you want to visit) and who are your enemies (those who would use your personal information for purposes you don't want), and how do you tell things to friends without those things getting into the hands of your enemies. It's counter-intuitive to have to treat your friends as if they're a channel to your enemies, but ... information leaks.

Via Flickr:
TELLING a friend may mean telling THE ENEMY